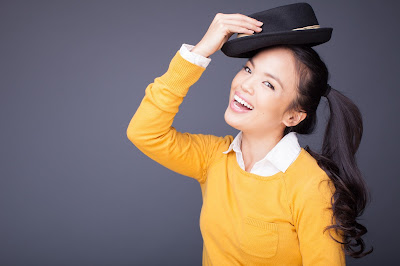 I have started a new series on Kay Kay’s Way called Interviewing with Kay Kay! I hope you will enjoy my new series and I know you will enjoy my interview with Nikki SooHoo. I have watched the talented Nikki SooHoo shine on the screen of hit movies such as The Lovely Bones, and popular shows like Phil of the Future. Therefore, you bet it certainly was an honor to be able to interview SooHoo!

Kay Kay’s Way: How did you get started in acting?

SooHoo: I was fifteen years old and I was approached by someone at the Grove who told me that I should get into acting. They recommended an acting coach to me whom I ended up working with. Thankfully, that acting coach happened to also be a manager and represented me for the first seven years of my career. In addition, I was also blessed to have parents that were open to me trying new things and were willing to take me to classes and auditions. It all kind of fell into place. I didn’t grow up thinking I was going to be an actress, but the industry found me and I fell in love with acting.

Kay Kay’s Way: What do you love the most about acting?

Kay Kay’s Way: What advice would you give to those trying to break into the acting business?

SooHoo: Create a strong circle of support around you. The support can come from the people in your life, other passions that keep you motivated, meditation, and/or self-wellness practices that can help you come back from the ups and downs of the business. This business is unpredictable and unstable, but having a strong support system around you will help a lot.

Kay Kay’s Way: What has been the hardest part about acting?

SooHoo: The hardest part is that this is not a linear business. Sadly, hard work does not always mean you will get the job. Also, one job doesn’t guarantee you are moving up in your career. One day you can be the star and the next day you could be forgotten. Sometimes it is hard to not take it personally. It is also hard to remember that your abilities and hard work are only a fraction of the equation that is used to cast people. There are so many reasons that are out of your control as to why you did or didn’t book the job. Though hard work doesn’t always mean you get the job, I do still believe that if you continually work hard, it will eventually pay off (maybe just not the way you expected).

Kay Kay’s Way: I have been a fan of Pretty Little Liars for the longest time. You were on the show and I was wondering if you could please tell me about your experience. I can only imagine!

SooHoo: It was really fun getting to work on Pretty Little Liars. My scene was actually the first one of the day so not all of the actors were on set yet, just Troian (who plays Spencer, the one I was in the scene with). Her and I got to hang out a bit. She was a very sweet and smart woman. I literally got there, went through hair and makeup, shot my scene, and was all done within four hours! It was super quick. As I was leaving I saw Ashley. This was nice because her and I went to high school together but hadn’t seen each other in years!  Also, one of my favorite things was that they had pink golf carts on set that were driven around the studio lot. They were super cute!

Kay Kay’s Way:  Last year I registered with a company to pursue being a background actress. I found myself getting frustrated with the lack of roles available to even background actors of color? While on set, I spoke to many actors and actresses of color who expressed their frustration with the lack of diversity in the film industry. You are a very successful actress. Have you experienced any of situations similar to what I just mentioned?

SooHoo: When I first started acting there were much fewer roles for Asian Americans. However, over the past decade I have seen the number of roles available to Asian Americans grow immensely. Slowly there are becoming more roles that aren’t ethnic specific, meaning they aren’t just looking for Asian people to play laundromat owners and nail stylists and African Americans to play gangsters. In my opinion, I believe that the industry is definitely taking steps in the right direction. I think that creators are broadening their perspective and their minds to what is possible and have started to give others a chance. Of course, there is still a misrepresentation in the media of what America actually looks like, but we do have to remember that a majority of the content creators are not people of color. This movement to be equally and rightfully represented in the media is not at the fault of any one person, but we need more creators of color as well. I think we are moving in a good direction for sure.

Stay tuned for my second interview with SooHoo where I discuss her project called Tag!